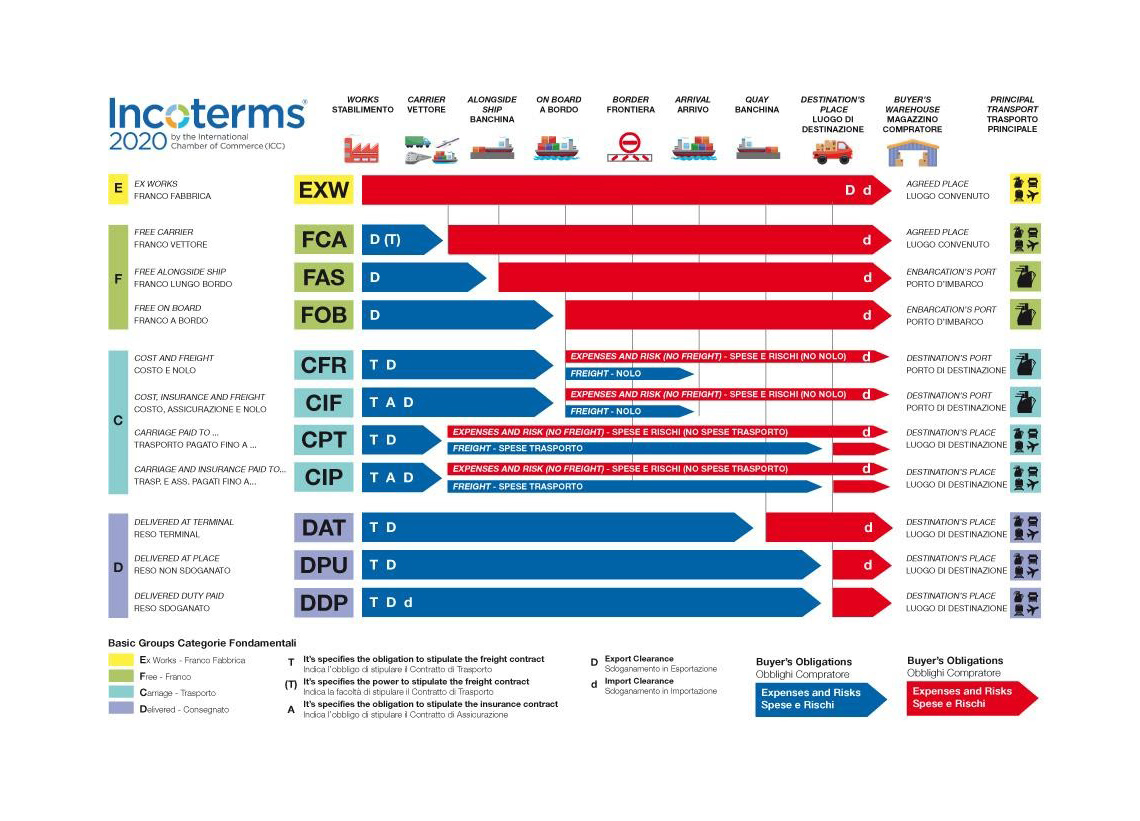 Posted on 3 February 2022 by Michel Menafra

Founded in 1919, the ICC (International Chamber of Commerce), began its first study of Incoterms® in 1923 as part of its initial efforts in facilitating international trade. This first study included only 6 terms used in 13 countries. A second study, this time involving 30 countries, was embarked upon in 1928.
The first edition of Incoterms® was published in 1936 and included the terms FAS, FOB, C&F, CIF, Ex Ship and Ex Quay. During the Second World War any further revision of the terms was suspended resuming in the early 1950s and concluded with the issue of Incoterms® 1953 where, for the first time, 3 terms not dedicated to maritime shipments made their debut: DCP (Delivered Costs Paid), FOR (Free on Rail) and FOT (Free on Truck).
A third revision was published in 1967 and included 2 new terms: delivery at frontier (DAF) and delivery at destination (DDP).

In the early 1970s the extraordinary growth of air traffic led to a new Incoterms® edition, which was published in 1976 and included the new term FOB Airport (Free on Board Airport). Subsequently, the terms were revised in 1980 and from then onwards every ten years, in 1990, 2000, 2010 and finally in 2020.
In the 1980 version, given the huge increase in container shipments, the term FRC (Free Carrier + nominated place) was introduced.
The fifth and completely revised version in 1990 simplified the term FRC by removing the rules for specific modes of transport (e.g. FOR; Free on Rail, FOT; Free on Truck and FOB Airport; Free on Board Airport). It was considered sufficient to use the generic term FCA (Free Carrier + nominated place) instead.
In 2000, the FAS and DEQ Incoterms® rules were amended in order to more closely adhere with the Customs regulations of the majority of countries.
In 2010 the D rule group was brought together; removing DAF (Delivered at Frontier), DES (Delivered Ex Ship), DEQ (Delivered Ex Quay) and DDU (Delivered Duty Unpaid) and adding DAT (Delivered at Terminal) and DAP (Delivered + Named Post).

The latest and most updated edition

The work on the latest revision, Incoterms® 2020, began in 2016, was published on 10 September 2019, on the occasion marking the ICC’s centenary, and came into force on 1 January 2020.
Incoterms® are originally published in English with authorised translations into 31 other languages by the various national chambers of commerce.
The official Incoterms® 2020 terminology, available in 6 languages (English, French, Spanish, German, Portuguese and Italian).
Let us begin with the classification of Incoterms® 2020. There are two possible methods: the first method uses the first letter of the acronym, whilst the second is based on the applicability of the rules to the modes of transport.
Using the first method we would have:

Using the second method we would have: 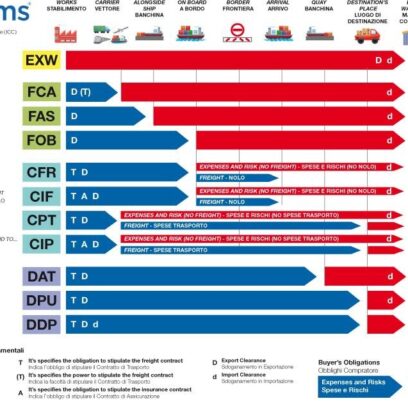 As for the new features presented in the 2020 version, these were introduced with the main aim of enhancing clarity and promoting a unified interpretation.

Clarity being the most important word

Amongst the structural innovations, one immediately notices the important work undertaken in the explanatory notes; in the 2010 version, these were purely indicative, appearing at the beginning of each delivery term chapter to elaborate on the most important points. In the 2020 version, the explanatory notes are much more detailed, with better diagrams, a differentiated structure for users and a reorganisation of the rules to allow a more immediate understanding of the characteristics of the shipment and its risks.
In order to make the identification of the responsibilities of the buyer and the seller more immediate and to be able to make a quick comparison between the various delivery terms, Incoterms® 2020 are published both in the traditional format, i.e. for each delivery term, and in a “horizontal” format where all these terms are grouped according to the rules that establish the roles and responsibilities of the seller and the buyer and are divided into A (seller side) and B (buyer side), according to the following scheme:

The rules governing the conditions of the delivery terms have also been reorganised with the aim of highlighting the most important points and those with greater impact: for example, delivery and the transfer of risk from seller to buyer, previously covered by rules A4/B4 and A5/B5 respectively, have been moved to positions A2/B2 and A3/B3, precisely in order to give them greater prominence.
All costs were then summarised under a single rule.
This is A9/B9 which gives a detailed and complete list of them so that the parties can easily identify their costs. This reduces the frequent problems arising from the fact that carriers structure their prices very differently.
A final note on the layout is that with the 2020 edition the Incoterms® brand wording is no longer in capital letters. It is also not mandatory to include the registered trademark symbol in the contract, nor do the new provisions repeal previous editions.
It follows from this that operators may also adopt versions of Incoterms® prior to the latest published version, but must take care to specify this where appropriate. If the parties fail to refer to the edition chosen, the terms of the latest edition in force at the time of the conclusion of the contract will be deemed to apply automatically.
However, as explained in our previous article, the Incoterms® can be freely modified by the parties, who must however be aware of the consequences in terms of operational clarity of their choice.

Before going into the Incoterms® 2020 terminology in greater detail in future articles, we would like to outline the most important changes introduced in the latest edition.
The DAT (Delivery at Terminal) term has been changed to DPU (Delivery at Place Unloaded).
The term ‘terminal’ has been removed in order to resolve the possible misunderstanding that this entailed when interpreted in the sense of a customs terminal. “Terminal” has been replaced by the term “place of destination unloaded” to extend the reference to any place, whether this is inside or outside. Therefore, this is seen as an important change, but more as a broadening of the boundaries of the term, meaning that it is necessary for the parties to nominate the delivery point in question as precisely as possible.
A substantial change relates, however, to the diversification of the level of insurance cover provided for two Incoterms® types. These terms are CIP (Cost Insurance Paid to – Carriage and Insurance Paid to), a term applied to any transport, and CIF (Cost Insurance Paid to – Carriage and Insurance Paid to), a term applicable only to maritime transport.
In the 2010 version, both terms imposed an obligation on the seller to take out transport insurance complying at least with the minimum coverage provided by clause C of the Institute Cargo Clause. In the 2020 version, however, the level of insurance cover in the CIP delivery term has been increased so that the seller is now required to obtain cover in accordance with the Institute Cargo Clauses A (All Risks). The insurance coverage required by the CIF remains unchanged unless otherwise agreed between the parties.
The most important and substantial change, however, concerns the FCA (Free Carrier) term and has been introduced to meet the needs of the seller in the presence of a letter of credit. In practice, in the presence of a letter of credit, the seller, in order to meet the demands of the bank or credit institution and therefore obtain the guarantee of being paid, must present their bank with the Bill of Lading with a note that the goods have been loaded on board. However, the carrier who issues the Bill of Lading will do so only after the goods have actually been loaded onboard the vessel, i.e. after the goods have been delivered in the case of an FCA sale, so the carrier will issue the Bill of Lading to the buyer and not to the seller. The seller will therefore be in the hands of the buyer, who may delay or even fail to deliver the Bill of Lading. In order to avoid the risk of not obtaining the Bill of Lading to present to the Bank, in practice the buyer would then decide on a FOB term rather than an FCA term, thus incurring more costs and risks as the point of delivery is moved to the placing on board. However, the change introduced by Incoterms® 2020 details precisely that in an FCA sale, the parties agree that the buyer must instruct the carrier to issue to the seller, at the buyer’s expense and risk, a transport document stating that the goods have been loaded. This optional mechanism is now provided for in rule A6/B6 “Delivery/Carriage Document” of the FCA delivery term.
Another change is that in the 2020 edition transportation by one’s own means is explicitly allowed, for DDP-DAP-DPU-FCA deliveries. This means that the seller or buyer does not necessarily have to rely on third parties for transport, as was the case in previous versions.

Compared to the previous edition in 2010, the Incoterms®® have remained unchanged in their number, i.e. 11 terms, and in their names (with the exception of DAT, which has become DPU).
The most important ramifications, however, concern the terms FAS, DDP and EXW, the elimination of which was discussed at length during the preparatory studies for Incoterms® 2020.
The term FAS (Free Alongside Ship) was seen as being almost completely unused. In particular, it was argued that FAS added nothing to the existing FCA, which regulates shipments with delivery at the port of loading.
Regarding the term DDP (Delivery Duty Paid), it was pointed out that it is used almost exclusively for shipments handled by couriers and through express couriers that handle all logistics procedures from collection and customs to delivery to the purchaser’s address.
The term EXW (Ex-Works) was challenged above all because it entailed a minimum level of obligation for the seller, who merely made the goods together with the relevant commercial documents available to the buyer at his premises, and left the foreign buyer with burdens for which he was not suited, such as and above all, providing for export customs formalities.
Despite the perplexity that these three returns generated, it was nevertheless decided to confirm their existence in the Incoterms® edition.
For further details on the individual terms, please refer to the articles published in future on this website.